Comics from the Silver Age–and I’m looking at you here, World’s Finest–often have a reputation for not making any sense, but if you read enough of them, you’ll start to realize that the stories are actually pattered on a rigid set of rules. Of course, the rules themselves are often completely nonsensical, but they actually are there, and that’s got to count for something.

Now the Golden Age, on the other hand… that’s where things are really crazy.

At the dawn of the medium, nobody’d even had time to figure out if there were rules yet, let alone what they were. After all, this is an era that gave rise to the work of Fletcher Hanks

, and that alone should give you the idea that “making sense” was, at best, a tertiary concern.

That said, Marvex the Super-Robot is completely insane.

Marvex, as you might recall from our previous discussion of his romantic entanglements, is a devastatingly handsome robot who has difficulty committing, but the more curious among you may have been wondering how he got himself into that situation to begin with, so allow me to enlighten you.

The whole thing gets started, as you might expect, in The Fifth Dimension, which–back in 1940–had yet to become the sole intellectual property of DC Comics, although it does play host to the same kind of large-headed all-powerful being that would show up to cause trouble for Superman four years later. In this case, though, they’re a lot more scientific, and after deciding to
“take some strange humans” to be their slaves, they set about building themselves a robot man.

How exactly Bolo’s “clever idea” to kidnap and enslave some humans turns into him building a robot in the space of one panel isn’t really made clear, but before long, he’s finished, and the first order of business is to inform Marvex that he’ll be working as a slave from here on out.

This, as you might imagine, would prove to be a mistake.

PROTIP: If you’re going to build a robot that can think for itself and then make it do menial labor, don’t make it twice your size, indestructible, and strong enough to pick you up and use your body to beat your friends to death. Alas, such is ever the folly of man. Or at least, the folly of imps from the Fifth Dimension.

Anyway, during his rampage, Marvex inadvertently causes an explosion that knocks him all the way through the dimensional barrier to Earth, and this is where things start to get weird…

Incidentally, “The Visible Rivets?” Great name for a band.

Anyway, once Marvex makes it to the Big City, he eventually tires of people looking at his “strange costume”–rather than, say, the fact that he’s a robot–and thus “decides to purchase a more rational outfit.”

No, really: That’s what it says:

Oddly enough, the fact that he’s a robot in a snappy blue suit makes him look even stranger than he did when he was a standard-issue naked robot*, but it does the trick, and people seem to ignore the fact that they can still see his metal face. Although now that I think about it, the story never actually says which city he ends up in, so I guess it’s possible that he’s rolling around Callander, Scotland–home of Clan Destro–where that sort of thing is completely normal.

Anyway, no sooner has he left the Men’s Warehouse when he stumbles across a damsel in distress, Clara Crandall, who is so important to the plot that we don’t even find out her name until three pages after she’s introduced… in a seven-page story. The distress in this case turns out to be the evil machination of presumable Ratzi* Von Crabb, who sets off a bomb in a high-rise office buliding, killing her father and making off with his secret battleship armor formula.

Needless to say, Marvex saves her by leaping up to the office and then jumping back down to the street with the Crandalls in tow and then sets off to mete out some harsh robot justice*:

Of course, this being the Golden Age, “justice” pretty much translates into “robot killing spree,” and after dishing out a move that would later gain fame as “The Reverse Kool-Aid Man”…

…which is made all the more terrifying by the fact that he went to the trouble of putting on a suit and tie before handing out the massive spinal trauma, he heads back to Clara and nips her womanly thoughts of romance right in the bud.

Sadly, this appears to be the high point in Marvex’s career: By the time he shows up again in Daring Mystery #4–which is also handily reprinted in the recent Masterwork

–his initial design has been replaced with a far more traditional robot look, although still in a suit.

On the bright side, though, he does get a better grasp of fight banter…

..which apparently causes Hitler, seen at the right, to swoon. Ah well. That’s the Golden Age for you!

*: These would also be fantastic band names.

The ISB is proud to present: 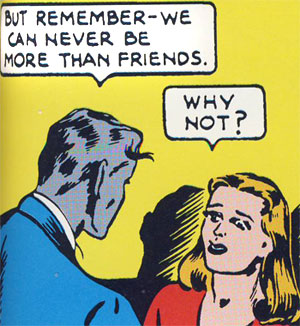 I don’t think I’m exaggerating here when I say that, based entirely on those two panels, Marvex the Super-Robot is the greatest Golden Age Character of All Time.

, which, pound for pound, has more quick disrobing than any Golden Age Comic outside of Disrobed Action Tales.

On the rare occasion that people like to buy me stuff, I like to make that happen.